Musical Legacy of the Acadian People 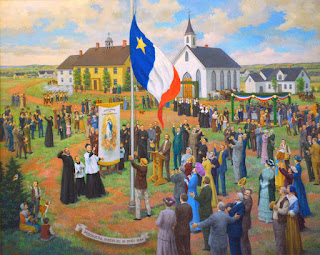 Music and song have always been an important part of Acadian culture. The Acadians brought hundreds of old French songs, many of which were originally accompanied by dances, to each region of the Maritime provinces in which they settled from 1538 - 1758.

Acadia (French: Acadie) was a colony of New France in northeastern North America that included parts of eastern Quebec, the Maritime provinces, and modern-day Maine to the Kennebec River. During much of the 17th and early 18th centuries, Norridgewock on the Kennebec River and Castine at the end of the Penobscot River were the southern-most settlements of Acadia. The actual specification by the French government for the territory refers to lands bordering the Atlantic coast, roughly between the 40th and 46th parallels. Later, the territory was divided into the British colonies which became Canadian provinces and American states. The population of Acadia included members of the Wabanaki Confederacy and descendants of emigrants from France (i.e., Acadians). The two communities inter-married, which resulted in a significant portion of the population of Acadia being Métis.

The first capital of Acadia, established in 1605, was Port-Royal. A British force from Virginia attacked and burned down the town in 1613 but it was later rebuilt nearby, where it remained the longest serving capital of French Acadia until the British Siege of Port Royal in 1710. Over seventy-four years there were six colonial wars, in which English and later British interests tried to capture Acadia starting with King William's War in 1689. During these wars, along with some French troops from Quebec, some Acadians, the Wabanaki Confederacy, and French priests continuously raided New England settlements along the border in Maine. While Acadia was officially conquered in 1710 during Queen Anne's War, present-day New Brunswick and much of Maine remained contested territory. Present-day Prince Edward Island (Île Saint-Jean) and Cape Breton (Île Royale) as agreed under Article XIII of the Treaty of Utrecht remained under French control. By militarily defeating the Wabanaki Confederacy and the French priests, present-day Maine fell during Father Rale's War. During King George's War, France and New France made significant attempts to regain mainland Nova Scotia. After Father Le Loutre's War, present-day New Brunswick fell to the British. Finally, during the French and Indian War (the North American theatre of the Seven Years' War), both Île Royale and Île Saint-Jean fell to the British in 1758.

Thanks to data gathered by the French linguist Geneviève Massignon and later by Canadian researchers at Université Laval, Université de Moncton and the National Museums of Canada we know that traditional Acadian music includes over 1,000 different songs (see Acadian Folklore Studies). This musical heritage has provided and continues to provide endless material for musicians and composers.

Until the end of the 19th century, the Acadians lived in isolated groups and had little contact with the outside world. This isolation helped to preserve the traditions of their ancestors: their way of speaking (which is a variant from the Poitou region in France), their cuisine, their celebrations and their oral traditions. Since the Acadians’ arrival on the North American continent in the 17th century, they have passed down songs, stories and legends from generation to generation.

I'm going to present a little background into the traditional music of the French from the period that settled Acadia (1538-1758).  It's not clear from what I've read whether the settlers of Acadia during that time were sophisticated enough to bring with them the High Baroque music of the courts, however we do know enough about the traditional or folk musical instruments of the time to make an educated guess about what that music might have sounded like, and how it influenced the music of that part of Canada today.

The Air de cour was a popular type of secular vocal music in France in the late Renaissance and early Baroque period, from about 1570 until around 1650. From approximately 1610 to 1635, during the reign of Louis XIII, this was the predominant form of secular vocal composition in France, especially in the royal court.

Traditional instruments from Béarn include the tambour de Béarn, a six-string drum used as a rhythm drone instrument to accompany the three-holed recorder.

Example
Gascony
Gascon small pipes, called boha (bouhe), are a well-known part of the local scene. They have a rectangular chanter and drone combination, which is unique to Gascony, and are made out of sheepskin with the fleece showing.
Example
Languedoc
Languedoc is home to several unusual instruments, including the bodega, a kind of bagpipe, and the aboès and graille, both kinds of oboes. The bodega is made out of goatskin, using an unusual process in which the innards of the animal are removed through the neck so that the entire, unbroken skin can be used for the instrument. It has only one large shoulder drone. The bodega is known from at least the 14th century.
Example
Limousin

Limousin is known for its violin music, as well as the chabrette bagpipe.

The most iconic form of Provençal folk music is a duo of fife and drum, or ensembles of galoubets-tambourins; the most prominent characteristic of the region's folk music, however, is the Italian musical influence.Provence & Alps

The southwestern region of Roussillon's music is shaped by its unique ethnicities, and includes forms of Catalan and Gypsy music. The former includes the sardana and is based around the city of Perpignan. The sardana is played by a band (coble) consisting of three kinds of oboes, flutes and other instrument, including shawms and bagpipes among some recent revivalists.

Brittany retains its own unbroken piping traditions as well as mainstay instruments such as the bombard.  There are two types of bagpipes indigenous to Brittany. The veuze is very similar to other western European bagpipes such as the Gaita from Galicia and Asturies, while the biniou kozh (old biniou in Breton) is much smaller and is used to accompany the bombarde. The biniou, which plays exactly one octave above the bombarde, and bombarde duo (soner ar couple) are an integral and common part of Breton folk music, and was used historically for dance music. The two performers play alternate lines that intersect at the end, in a similar manner to the Kan ha Diskan style of singing; the bombarde does not usually play every line of the tune, however, usually instead playing every other line, or three out of four lines in a dance tune.

Outside France the island of Corsica is perhaps best known musically for its polyphonic choral tradition.  There are two dances of ancient origin found in Corsica: the caracolu, a women's funeral dance, and the moresca, illustrating the struggle between Moors and Christians.  The cetera, a cittern of 4 to 8 double strings that is of Tuscan origin and dates back to the Renaissance, is the most iconic Corsican traditional instrument.  Other Corsican instruments include:

Fiddle lessons are available Fridays and Sundays at Downtown Sounds in Northampton, online using Skype or Hangouts, and may be available at your location.

Looking for Bands that want to make money!

If you or someone you know plays in a band, put them in touch with me! 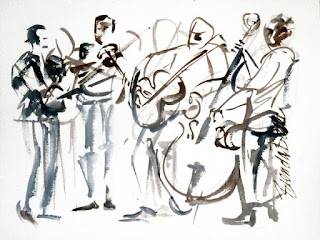 Don't see what you're looking for?

We also book solo instruments (violin, piano, harp, guitar, etc.), duos, trios, quartets, as well as many other bands not listed here. Just tell us what you're looking for and we'll let you know if we can provide it.

We can provide a DJ for your event instead of a band, or in addition to a band. Just ask and we can provide more info!
at July 06, 2016

The Granby Mass Bluegrass Jam Session has been cancelled until further notice.
at July 02, 2016