Folk Song and Music in Québec: A Brief Introduction 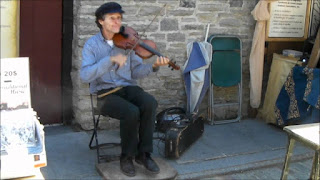 On his first trip to the New World, in 1534, explorer Jacques Cartier found a rich land inhabited by Huron and Iroquois Indians. He promptly claimed it for France. Cartier gave the name “Canada” (from an Iroquois word for “town”) to the area around the Iroquois village of Stadacona, on the banks of the St. Lawrence river. In 1608, the first permanent French colonists established Québec city in the same location, bringing their songs and music with them.
Early immigrants to Québec came from all over France, but especially from several provinces in the north and west: Normandy, Picardy, Anjou, Poitou, and Brittany. Not surprisingly, many of the traditional French songs we now find in Québec are common in those provinces as well. “Dans les prisons de Nantes,” for example, is set in Nantes, an important city that was historically the capital of Brittany. Located at the confluence of the Loire, the Sevre, and the Erdre, Nantes might be remembered fondly by French-Canadians as a model for their own important town of Trois-Rivières. The song is a fine example of an old French ballad, and was probably among the earliest French songs brought to the New World.
During the later seventeenth century, a few hardy Frenchmen in Québec established themselves ascoureurs de bois, or “wood-runners.”  These unlicensed fur-traders traveled west of the Ottawa River into the country around Lake Superior, in search of beaver pelts.  The pelts were used to make felt for fashionable hats in Europe, especially England, and they were the hottest commodity in North America.  Within twenty years, the French authorities, seeking both to limit the trade and to get a piece of the action, introduced a system of licenses, or congés, that resulted in licensed traders, known as voyageurs.
Voyageurs were crucial to the survival and development of folk song in Québec, for several reasons. First, they spent months in small groups traveling over rough country; in such a community, a good repertoire of songs could be the difference between a valued companion and a tedious bore. Thus, the voyageur life encouraged men to learn and sing songs. Second, voyageurs spent the greatest part of their time paddling great canoes along rivers, or carrying cargo on their backs during portages. Singing became their method of keeping their paddling coordinated and their marching steady, and they adapted all manner of traditional songs into work songs. We owe much of our knowledge of this early Québécois music to a number of collectors, none more important than the pioneering folklorist Marius Barbeau, who collected over 13,000 songs from oral tradition.
Many Québécois folk songs are done in call-and-response style, mirroring the tradition of western France. This tendency was reinforced by the voyageurs. Call-and-response allows a group to sing a song as long as one member knows it, which greatly increases the number of songs that can be sung en masse. Call-and-response also allows each singer time to rest and breathe while the others are singing, which is important when you are paddling a canoe at 40 to 60 strokes a minute! On this recording, “Le moulignier amoureux,” “Canot d’écorce,” “Auprès de ma blonde,” “C’est la belle Françoise” and some of the songs in the “Chasse-Galerie” medley all follow this call-and-response pattern.
In nineteenth-century Québec, Christmas Day was primarily a religious holiday.  Raucous parties were reserved for New Year’s, as revealed in our songs “Oublions l’an passé” and “Le réveillon du jour de l’an.”  One of the favorite styles of party songs among both French and Québécois singers is the cumulative counting song; as in the English-language song “The Twelve Days of Christmas,” these ditties are primarily concerned with counting gifts or blessings. “Les Parties de Gregoire,” which comes from the repertoire of Jean-Paul Guimond, counts the dishes at a sumptuous New Year’s feast.
Traditionally, Québécois folk songs were sung unaccompanied, either solo or in unison. We have added vocal harmonies and instrumental accompaniment, borrowing elements from later Québécois performance style.
The instruments most appropriate to our period are the fiddle, bones, and…feet! Bones—known as os in French—are usually the rib-bones of an animal, held two (or more) in each hand, and shaken or rolled so that they click together rhythmically. Violins, along with bagpipes and hurdy-gurdies, were among the most popular instruments for dance music in France during the period of Québécois settlement. Bagpipes and hurdy-gurdies did not travel to the New World, so the fiddle predominated. In the absence of instruments, people sometimes made music by singing nonsense syllables, a vocal technique known as turlutter.
A well-known, indeed, defining feature of Québécois folk music is a persistent galloping rhythm tapped out with the feet. In the past, a fiddler or singer would simply tap his feet to provide percussion. Nowadays, many bands equip a musician with a special board to amplify the sound of what has come to be called podorythmie.
The button accordion, invented in 1829, became popular in Québec only at the end of the 19th century. In the same period, harmonicas, pump-organs, and eventually pianos came to be used in Québec. Guitars—especially four-course and five-course baroque guitars—have been known in Québec since the 17th century. However, the six-string guitar did not emerge until at least the 18th century, and its use in traditional Québécois folk music is a 20th-century development.
Unlike Québec’s song tradition, Québec instrumental tunes have as much in common with Irish, Scottish and English dance tunes as with French ones.  Jigs and reels abound in Québec, owing to the influence of British and Irish neighbors.  Meanwhile, one only occasionally hears tunes of French origin.
What you’ll hear on Le temps des Fêtes, then, is a selection of ancienne musique and nouvelle musique Québécoise, blending old French traditions, British and Irish influences, and New World ingenuity with modern flair.
November 24, 2010
at August 31, 2016 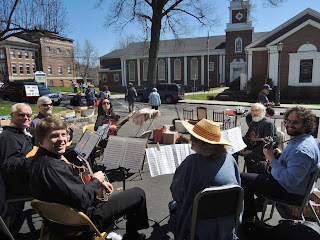 There are several mandolin group concerts coming up.  These concerts are free to all!  Donations are gladly accepted.

The concert dates are as follows:
If you would like to participate in the Mandolin Group, classes meet currently Monday nights from 7-9pm in South Hadley, MA.  PM Adam Sweet for an address if you would like to attend.
Each class meets for two hours.  Sheet music, books and other study materials are provided by the instructor. The class is open to any and all levels of mandolin, mandola, mandocello and mandobass, regardless of experience.
The cost of the class is only $125 a month!  If you buy 12 classes in advance, you may take 10% off the total cost, a $150 value.
at August 23, 2016