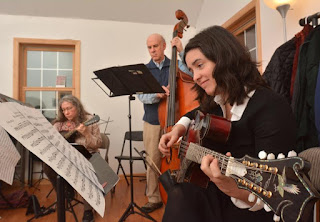 The Folk Music Group will be starting up again next Thursday, the 22nd of February.

This group is open to all levels and abilities and is not restricted to just mandolins, welcome guitars, fiddles, flutes and percussion!

If you would like to join the Folk Music Group, please use the form on this page to contact us.  Include your email and we'll send you a PDF of all of the sheet music with chords!

The cost of the class is $15 per person.

If you're just getting started on mandolin, or you've been away for a while and would like to brush up on your skills, this group is for you!  It meets Wednesdays from 7-9pm.  The group is working on scales, arpeggios, chords, simple melodies and learning to sing and play together.  It's a lot of fun and available for ages 18+.  If you would like to register for the group, contact us.
at February 14, 2018

Tonight's rehearsal will focus on the Schubert trio, and the Mozart.  If there's time, we will play through the Bach.

How did medieval people dance?

When trying to understand the Middle Ages it is sometimes the aspects of daily life that are most difficult to research. Few writers from the period left detailed descriptions of the games they played or what they did to entertain themselves.
For example, historians have known that medieval people enjoyed dancing, but they did not know exactly how they danced. A recent book by Robert Mullally is answering a part of this question, detailing one of the most popular dances of the Middle Ages.

In his book, The Carole: A Study of a Medieval Dance, Mullally pieces together a wide variety of literary sources that mention the Carole, one of the main dances of Western Europe in the 12th and 14th centuries. He reveals that it was a relatively simple dance done by men and women together: to do the carole, a group of people, usually an even number of both men and women, would form a circle, sometimes around an object like a tree. They would each hold hands (sometimes they would hold each other by their fingers) in this circle and move to the left (in a clockwise direction). By moving sideways to the left, the dancers would start their step with their left foot, and then join the right foot to the left. The sources often describe it as the right foot striking against the other. It was considered an elegant and graceful manoeuvre. The various sources never mention any other kind of moves with the Carole. Mullally adds, “the very simplicity of the dance explains why no written choreography or dance manual was required.”
The music of the Carole would be sung by the dancers themselves. Usually it would be one of the dancers, or a small group of them, who would begin the singing. After a few songs, they would give way to another dancer, who would then sing while the group continued their dance, and so on. Some sources talk about those dancing the carole would be able to go on for hours (one imagines that some people would leave or join the circle as the dance went on).
There were many different songs that could be sung for the carole, but we only have a few examples of their lyrics. They include:
1) “You do not go the way I do, nor would you go that way.” (Vous n’a les mie tout en si que je fais. Ne vous, ne vous n’i saries aler, Ne vous, ne vous n’i saries aler.
2) “Love me, my sweet blonde, love me, and I shall not love anyone but you.” (Amez moi, blondete amez / Et je n’amerai se vos non!)
3) “If I have great joy in my heart, do not ask whence it comes! Galyenne, my sweet sister, if I have joy in my heart, I do not want anyone at all to know about it! That I love with all my heart, you know full well. If I have joy in my heart, [do not ask whence it comes!]
Se j’ai grant joie enz enz mon cuer
Ne demandez dont elle vient!
Gallyennne, tres douce suer,
Se j’ai grant joie ens enz mon cuer
Ne veul que nuls en sache fuer!
Que j’iang du cuer vous saves bien.
Se j’ai grant joie enz enz mon cuer
[Ne demandez dont elle vient!]
While a few descriptions of a carole also involved an instrument accompanying the music, such as a drum or horn, for the most part instrumental music would be used with other types of dances, such as the hove danse.

Here is a video of a Carole dance:

For about three centuries the carole remained a popular dance with all segments of society, from nobility to the peasants. Not everyone was happy with this dance, however, as a few religious moralists bitterly complained about it (their writings also offer some of the best descriptions of these dances). Jacques de Vitry, a French theologian from the 13th century, said that the dance “is a circle whose centre is the Devil, and in it all turn to the left, because all are heading towards everlasting death. When foot is pressed to foot or the hand of the woman is touched by the hand of a man, there the fire of the Devil is kindled.” Meanwhile, the author of the Mireour du mondefound that “all those men and women who carole sin in every member of their bodies by turning elegantly and by moving and shaking their arms, by singing, and by speaking dishonourably.”
The Carole: A Study of a Medieval Dance was published by Ashgate in 2011
at February 09, 2018 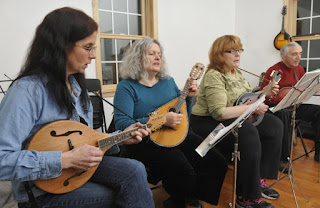 The Mandolin for Beginners class meets Wednesdays from 7-9pm

If you're just getting started on mandolin, or you've been away for a while and would like to brush up on your skills, this group is for you!  It meets Wednesdays from 7-9pm.  The group is working on scales, arpeggios, chords, simple melodies and learning to sing and play together.  It's a lot of fun and available for ages 18+.  If you would like to register for the group, call: 413-561-2275 or visit our website sweetmusicstudio.us
at February 08, 2018